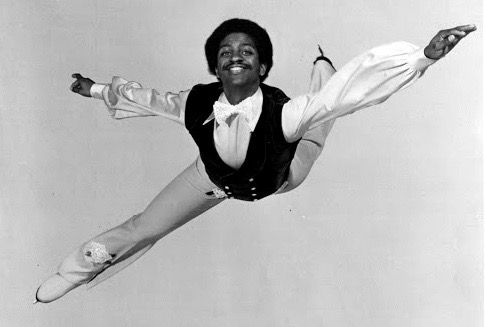 We are proud to share with you some performances and messages from our performers and collaborators of color.  Atoy Wilson, a trailblazer and beloved member of the ITNY Artistic Advisory Council was the first African-American skater to compete at the U.S. Figure Skating Championships and first African-American to win a national title in figure skating. Here is his personal statement, along with highlights of Atoy's Competitive Figure Skating Years (1959-1969).

Atoy Wilson - skating through the years.

"...Connecting….connector points….Los Angeles...Birmingham, Alabama....Paris. Connecting the remembrance of my identity as an African American man through the lens of encountered scorn – profiled, stopped, and questioned by zealous L.A. police officers; by ignorance – questioning with fear and trepidation of my performing in Birmingham with Holiday on Ice; with hate - attacked in Paris by xenophobic militia who despised my skin color.

I never have had to endure the suffering and oppression which my ancestors have gone through. The chasm between blacks and whites today is an insidious scar on this nation’s fiber. The atrocious acts of decimating our black men need to immediately stop. The unjust pattern of grouping all black people into a generalized category of hopelessness needs to be eradicated. Blatant systemic racism needs to be confronted not by violence but through acts of community strength in numbers with tactical nonviolent actions. Progressive thinking and not regressive apathy."

“….the choice to love is a choice to connect, to find ourselves in the other.”  - Bell Hooks

ITNY stands in solidarity with the Black community in the fight for racial justice. As long-overdue attention is being brought to all those who have suffered because of systemic racism, injustice, and violence, we are focused here at ITNY on the work needed in response.

ITNY continues to remain invested in raising awareness, sharing resources and offering performance and choreographic opportunities to skaters of color.  We believe firmly that moving our society forward and treating everyone with the dignity and respect they deserve is a responsibility we all share. That is why, as we mourn and march with the families and loved ones so deeply affected, we recommit to fighting racism and bigotry in all its forms. Together as a community we can make lasting change.

· Conversation - Claudia Rankine: On Whiteness: MacArthur Foundation Fellow and acclaimed author Claudia Rankine present an investigation of the historically unquestioned role whiteness plays in race relations and will be followed by a Q&A with Rankine and ArtsEmerson Co-Artistic Director, P. Carl. "Given that the concept of racial hierarchy is a strategy employed to support white dominance, whiteness is an important aspect of any conversation about race. This talk will make visible that which has been intentionally presented as inevitable so that we can move forward into more revelatory conversations about race.”—Claudia Rankine https://howlround.com/happenings/conversation-claudia-rankine-whiteness

· On Racial Justice: A letter written by Indira Etwaroo, the Executive Artistic Director of the Billie Holiday Theatre in Brooklyn, and published in the BK Reader. Along with other perspectives, it thoughts on how white cultural leaders and audiences can be allies. https://www.bkreader.com/2020/05/31/on-racial-justice-a-letter-from-billie-holiday-theatre-artistic-director-indira-etwaroo/

· Black Liberation Reading List: In response to the uprisings across the globe demanding justice for Black lives, the Schomburg Center has created a Black Liberation Reading List. The 95 titles on the list represent books Schomburg staff and the public turn to regularly as activists, students, archivists, and curators, with a particular focus on books by Black authors and those whose papers Schomburg stewards. https://www.nypl.org/blog/2020/06/09/schomburg-center-black-liberation-reading-list

· White Fragility: Michel Martin interviews Robin DiAngelo, author of “White Fragility,” to talk about what she recognized as her own unconscious bias. Originally aired on September 21, 2018. https://www.youtube.com/watch?v=6O27_yBQ8Qc

· BlackSpace Manifesto: BlackSpace is a collective of Black urbanists from various disciplines and sectors. The collective has a set of principles called the BlackSpace Manifesto that its members have co-created over time, including through their ongoing work in communities like Brownsville. Says one member, “these principles are focused on the transformational work and care needed to address the immense challenges that we face in our Black communities. I hope that some of you will take a look at it and consider what of your ways and means (and power and privilege) can help with New York's and the nation's much-needed transformation.” https://www.blackspace.org/manifesto

· Taking About Race: The National Museum of African American History and Culture has tools and resources on its website to help address the number one question people have asked museum staff since it opened: how to talk about race. Its primers address how to be an effective ally against racism. https://www.nmaahc.si.edu/learn/talking-about-race

· For Parents and Families:

o The Children’s Museum of the Arts supports parents and caregivers as they do what can be the hardest part of the hardest job in the world – listening to their children. To this end, they have compiled an ongoing list of resources for children and families.

o Sesame Street / CNN Town Hall: CNN partnered with Sesame Street for a special town hall about racism, giving both kids and parents an opportunity to explore the current moment the nation is living through and to understand how these issues affect people. Watch it here.

o AntiDefamation League Guidance for Family Conversations about George Floyd, Racism, and Law Enforcement: a bilingual Spanish/English guide for discussion with youth ages 11 and up.